St Volodymyr Eparchial Ukrainian Park site was purchased in two separate acquisitions of 80 acres each. The first parcel was purchase d in 1959 for $1,005.00, under the auspices of His Excellency the late Bishop Andrew Roborecki, the first Bishop of the Saskatoon Eparchy. The park site was recognized by Rev Dr Volodymyr Iwaszko as a verysuitable location for Christian families to develop their spiritual and physical well being. Fr Iwaszko directed much of his energy woring with children and youth an throughht them to love, esplore and respect nature. An adiditonal 80 acres was purchased in 1972 for the sum of 3,000.00

A number of caplital projects were understaken over the years that included construction of facilities that made the park more comfortable and accessible for various groups including seniors, disabled people, religious orgnaizations, youth groups, scouts and guides, eco-study groups, camp participants and others. The guiding princible for all park users is respect for nature and all the facilities in order to preserve maintain and develop the park for future generagtions.

On April 10 2008 the park was incorporated under the non profit corporations act, 1995 as St Volodymyr Ukrainian Catholic Park Inc.

St Volodymyr Memorial Church was built in 1984, it is a 25 ft by 50 ft single story structure built on a permanent foundation. It has a wood frame and wood beam construction, a 100% log exterior preserved with oil based stain. Its cottage shaped cedar shake covered roof has five cupolas with crosses and a lightening rod. Construction of the church began in 1979 .In 1982 its completion was celebrated with a Divine Liturgy. a donor’s plaque is located on the left entrance wall next to the door. The church is wired for electricity. There is no heating or air-conditioning.

The bell tower is a 12×12 foot wooden structure enclosed at the lower level and open beam at the top with a domed roof and cross. It was construction is 1984 by Orest Rawlyk. The bell for the tower was sponsored by eh Ukrainian catholic brotherhood and purchase at an auction near Rosthern for $800 by Matt Boyko, Steve Woytowich and William Boyko. The bell was officially christened (or baptized) and given the name “Andrew” during the UBC provincial convention.

Camp StartsJuly 17th, 2020
Ready for the best summer ever? 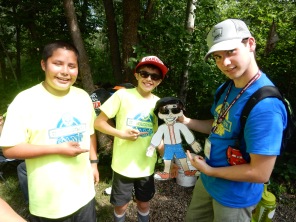 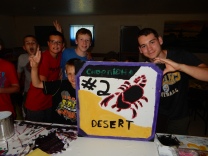 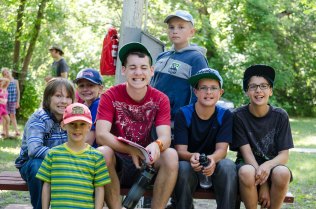 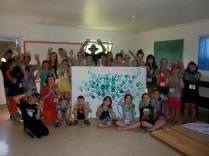 Each child put their hand print on the St. Volodymyr Tree, we will grow together this week